Add me… and other warnings 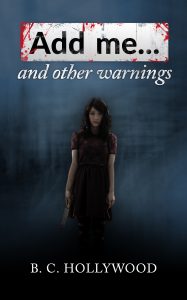 Add me… and other warnings is a short collection of cautionary tales in short story, flash fiction, and prose poetry form.

Add me… Love and stalking on social media have unforeseen consequences. Shaded A gritty tale of loss and vengeance, played out on a housing estate backdrop. Imitative Magic The repercussions of ritual magic at a country Halloween celebration. Fresh One psychopath’s unique taste… Wounds A prose poem about a life and the wounds inflicted upon it.

“I’ve never experienced such short stories that made such a lasting impact. In a few short pages, the content and the characters stay with you. The supernatural and paranormal twists add a depth to these stories without detracting from the practical realism in the premise. Intelligently written, can’t wait to see what else B.C. Hollywood has up his sleeve.” – Goodreads Review

“I’ll try not to have any spoilers here because Mr. Hollywood’s twisty, surprising stories are too good to spoil. They should be savored by each reader who comes to them. But I will say that there’s always a sting in the tail, somewhere.” – Amazon Review

Add me… and other warnings is available now as eBook or paperback on Amazon and is free for Kindle Unlimited subscribers.

Get it on Amazon UK here or Amazon US here. It’s also available worldwide on Amazon stores. 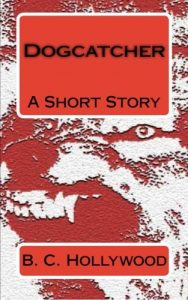 In Dogcatcher: A Short Story, Samuel Legge, the village dog-catcher, has received news that has cast a shadow over his future. It couldn’t have happened at a worse time because a figure from his past now threatens the person he holds dearest.  But Sam is nothing if not resourceful, and he’s not the sort of man you want to back into a corner. Don’t count the old dog out just yet!

“This is a beautiful and fully-realized short from B.C. Hollywood. The titular character, Sam Legge, faces the usual challenges of fatherhood: trying to communicate with his maturing daughter and dealing with his own advancing age and mortality. But Sam has more than the usual challenge when a spectre from his past returns and threatens more than his daughter’s heart. Sam’s method of dealing with these challenges is as resourceful it is gruesome.” – Amazon Review

Dogcatcher is available now as eBook or paperback on Amazon. 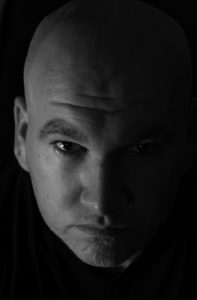 B.C. Hollywood is an Irish author of dark fiction. He spends much of his spare time battering raw story ideas into shapelier form and writing film reviews on The Strange Review. He works as an app developer, holds an M.Phil. in Race, Ethnicity, Conflict, and is currently studying toward an M.A. in Film and Television.

He works as an app developer, holds an M.Phil. in Race, Ethnicity, Conflict from Trinity College Dublin, and is now studying toward an M.A. in Film and Television at Dublin City University.